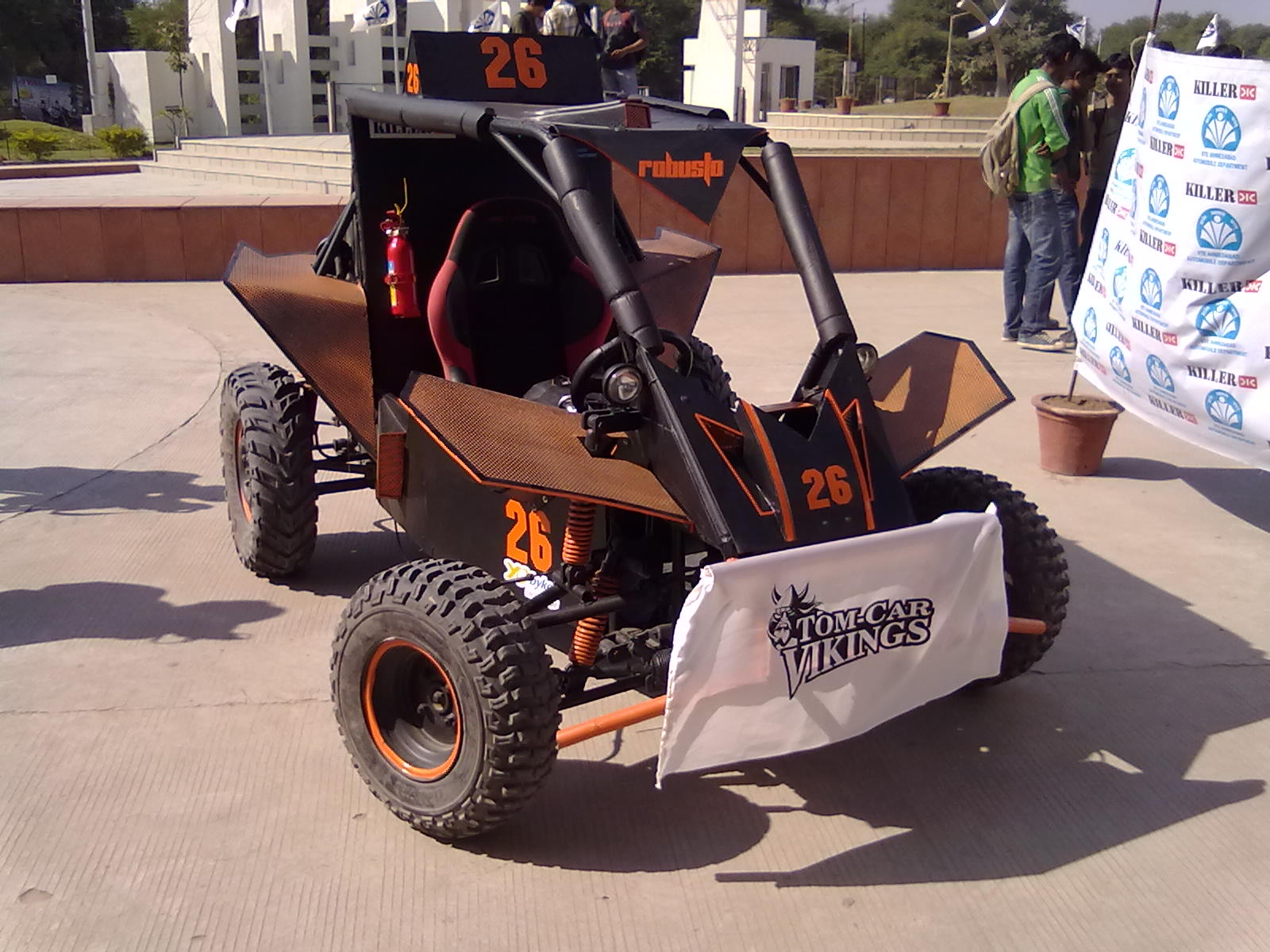 SAE International , formerly the Society of Automotive Engineers, is a US based globally active professional association and standards organization for engineering professionals in various industries where principal emphasis is placed on Transport industries such as automotive, aerospace and commercial vehicles.

Baja SAE is an intercollegiate design competition run by the SAE. Teams of students from universities all over the world design and build small off-road cars. All cars have engines of the same specifications. As of 2012 the engine has been an unmodified Briggs & Stratton –Intek 20 single cylinder engine with a displacement of 305cc and power output of approximately 10 bhp (7.5 kW).

The goal in Baja SAE racing is to design, build and race off-road vehicles that can withstand the harshest elements of rough terrain.

The Indian chapter of BAJA SAE racing was introduced in 2007. Since then 6 editions have taken place.

We, as Indus Institute of Technology & Engineering, are proud to have participated for the last four years.

The story of the 2013 car began with the registration phase in the month of May ’12. A total of 260 teams had registered across India. Post registration, each team had to create a virtual car with all the design calculations and computer simulations to prove the worthiness of their entry into the next phase. In September 2012, only 120 teams made the cut from this event that is called the ‘Virtual BAJA’. Indus University Team was one of the six teams from Gujarat which was allocated the #34 in an alphabetical order.

The fabrication of the frame began in the month of October under the supervision of faculty-team of Automobile Engineering Department along with the logistical support from Mechanical Workshop at IU. Once the frame was ready, installation of engine, transmission, suspension system, steering system etc was carried out prior to the testing and further development phase of the car.

On 30th January, BAJA SAE Technical Inspectors visited our campus to put the final stamp on the pre-event inspection. Finally the car was ready keeping in mind the aesthetics. The car was then unveiled to the Patrons- Dr. Nagesh Bhandari & Mrs.Ritu Bhandari, the Vice-chancellor- Dr. D.P.Giridhar & the Registrar Col.(Retd.) S.K. Sharma of the University.

On 16th February ‘Dynamic Event’was organized, it was to test how a vehicle performs under a variety of conditions. Conditions such as acceleration in 150 feet, Maneuverability tests and hill climb.The acceleration times are then converted into ‘grid positions’ in which IU Team secured 29 thposition, the best ever starting position. On n the 17th February’13, was the mother of all events – ‘The Endurance Test’. By this time only 90 cars were left in the competition. Lap after lap of a 3 Km circuit began putting vehicle under maximum stresses, accelerating, heavy braking, and skidding, over and under taking, colliding, toppling over and so on. Less than 50 cars endured the three and a half hour race. IU Team stayed in the top 15 for the most of the race duration in which the team had to endure a collision and a clutch-cable failure. The final day witnessed the result where IU Team scored 707/1000 maximum points, positioning IU on the 11th position in the competition. This feather in the cap places IU at Number One position across the state of Gujarat.

With this achievement the Blood-Sweat and Tears of IU Students had been paid off literally!

IU looks forward to participating in BAJA next year to achieve even higher goals.