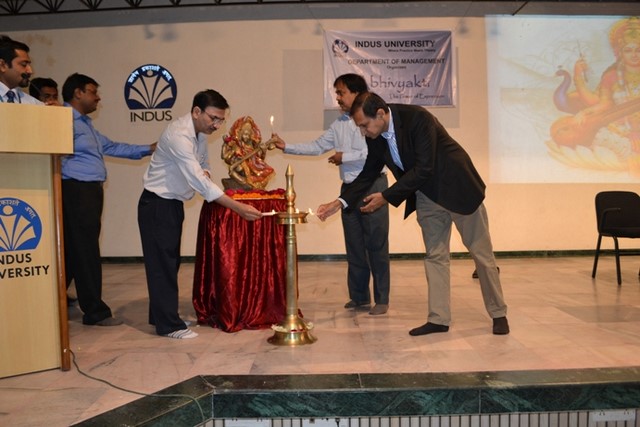 The Indus Institute of Technology & Engineering (IITE), Ahmedabad recently held a one day “Entrepreneurship Conclave 2014” on 28th March 2014. The initiative being a part of IITE’s Entrepreneurship Development Cell laid emphasis on the fact that while entrepreneurship is a satisfying wealth creating option for students, it is also bundled with many failures. However, the consensus remains that the final outcome is always satisfying and wealth generating which was echoed by the invited speakers from various disciplines.

While speaking during the conclave, Mr. Chandan Chaterjee, Director Centre for Entrepreneurship Development, Govt. of Gujarat said, “entrepreneurship is not merely art and science. But it also has passions involved in it and we Indians make good entrepreneurs.” He further added that while entrepreneurship is an individualistic trait, team support is always required to catapult it to the next level.

According to Ms. Hina Shah, Director ICECD, who shared various aspects of her entrepreneurial journey, the greatest motivation for her being an entrepreneur was the idea of generating wealth, since wealth was a great enabler. She further spoke about the importance of belief and confidence in this journey filled with highs and lows, the importance of learning from one’s mistakes through thorough introspection, and the need for emotional support from one’s family in making the chosen entrepreneurial path a success.

Mr. Kaushal Mehta , Founder and CEO, MOTIF, while talking about his experiences as an entrepreneur inspired the audience to dream, develop the ideas and not to be afraid of failures. “Failures will happen, but one has to keep pushing forward, since out of failures, emerge some of the greatest ideas,” he said.

Mr. Milan Patel , Associate Director, SNL Financial shared his experiences with the participants. He also encouraged the participants to go-ahead with their plans and take keen interest in their venture.

The students involved in Indus Innovation Cell (IIC) also discussed their ideas for their proposed venture with the experts.